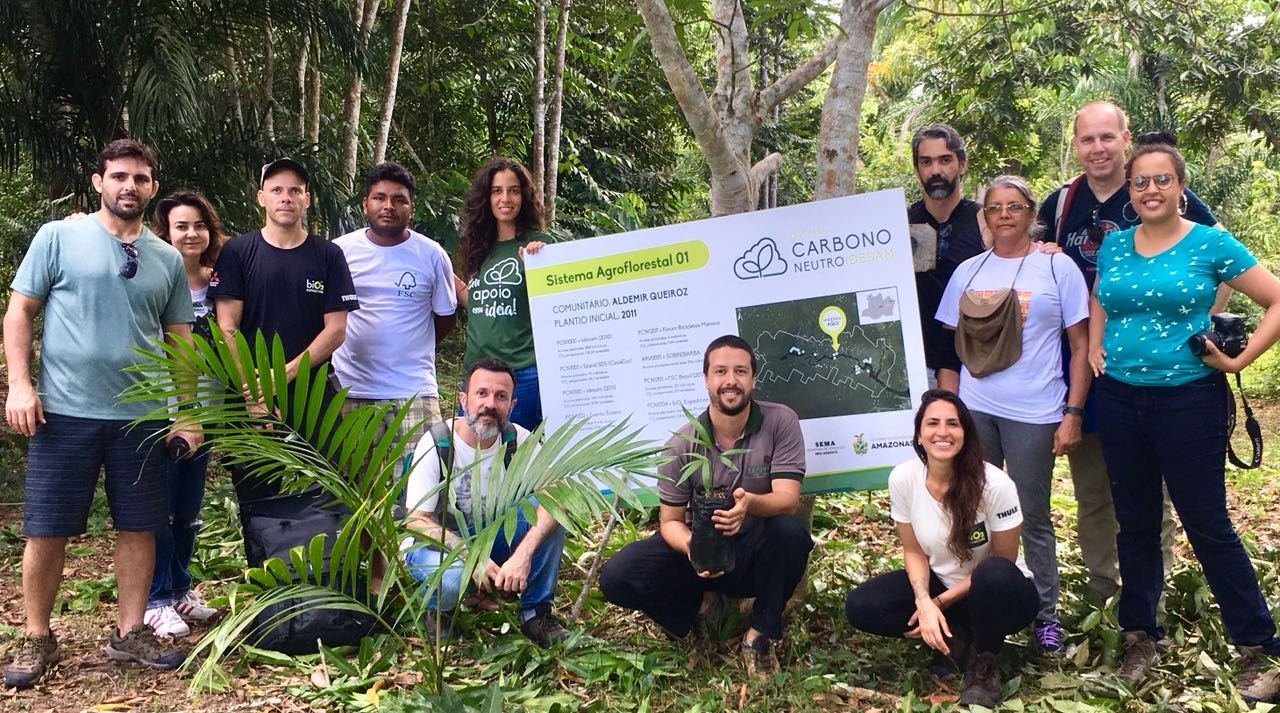 For three days, nine partners of Idesam’s Carbon Neutral Program (PCN) were in the Uatumã’s Sustainable Development Reserve (RDS), located northeast of Amazonas, to get a closer look at the results of the work on offsetting greenhouse gas emissions (GHG) through Agroforestry Systems (SAFs). This meeting, an initiative of Idesam, took place between April 3rd and 6th, bringing PCN’s clients closer to the beneficiary communities.

Among the results achieved by the Carbon Neutral Program, until now, are the planting of more than 22,000 trees in 27 areas, 26 hectares of degraded areas recovered, 60 ‘carboneutralized’ partners and 27 families benefited by the activities. The main purpose of the program is to maintain local agricultural and forestry production through a low carbon social development model, in order to generate carbon “credits” to offset the emissions of interested partners. The visit to the Uatumã’s RDS was attended by nine Idesam’s partners, which include bi02, Sobrebarba, TRE-AM, TR Mídia and Herenboen Nederland Foundation.

According to Idesam’s Climate Change Program (PMC) researcher, Isabele Goulart, the idea of the visit is to make the clients aware of how the field dynamics work and better understand the program as a whole. Beyond experiencing the Amazon reality, the partners were able to know closely the families that help the program to exist and the benefits generated by each neutralization initiative.

In addition to that approximation of customers with the field, the expedition was able to show how trees are planted and how local communities engage with the program, in order to make a connection and “make more sense to the investment that they (clients) are making to neutralize the emissions generated by their companies or initiatives”,  says Goulart.

“During the expedition it was possible to show some of the agroforestry systems planted to neutralize the initiatives of each partner. We show how the plantations are made and some of the results generated by the program. The partners were also able to participate with planting of seedlings “, completes the researcher.

According to the agricultural technician of the program, Jefferson Araújo, the meeting between companies and beneficiary families was an opportunity to show in a more practical way the biodynamics of the reserve, with the producers themselves talking about the benefits of the system, that go much further than planting seedlings. With this, the companies were able to know areas previously degraded, that have nowadays a direct production and generation of income to the families.

Among the main potentialities of RDS are the timber plants, which will benefit the future production of Andiroba, Cumaru and Brazilian Nuts, as well as the use of Ipe, Tauari, Paricá, Cedar and Itabaú timber for the next 27 years. Cupuaçu, graviola, açaí and cacao, planted after a local market analysis by Idesam, are products with high production potential in the region.

“There were significant changes after Idesam arrived, with the support of technical assistance, not only in planting, but also in raising small animals. In addition, the RDS has four greenhouses of seedlings and some of them have already begun to explore the tourist potential of the area, with visits from the public”, says Araújo.

The expedition, which included visits to the communities of Santa Luzia and Jacarequara, was also responsible for a Reading Workshop aimed at local children. The workshop was an initiative of the author of the book ‘Warriors of the Amazon’ (‘Guerreiros da Amazônia’, in Portuguese), Ronaldo Barcelos, from TR Mídia, one of the initiatives that had their emissions neutralized by the program. The book tells the adventures of forest heroes with superpowers of Amazonian animals, who use their magical knowledge to preserve the environment.

The book chosen for Uatumã’s RDS childrens activity could not be more appropriate, as this is the world’s first carbon-neutral publication. The activity was born when the third book of the Amazon trilogy was in final phase and was also included in the PCN to compensate the emissions of its production.

Launched in 2009, the series ‘Warriors of the Amazon’ was introduced spontaneously in dozens of schools throughout Brazil, with teachers from the fifth and sixth grades using the books as support in classes or subjects that include environment, Amazon and climate.

“I’ve been travelling to the Amazon for 20 years and I could clearly see that my books would not reach the children of the region because of logistics and costs. I decided to do something about it with our publisher’s own resources. In recent years, we have been able to donate 10,000 books to 500 schools, mostly in the Amazon. This was only possible with the support of NGOs such as Idesam”, says Barcelos, who provides an annual average of 2,000 books for donation in schools and communities.