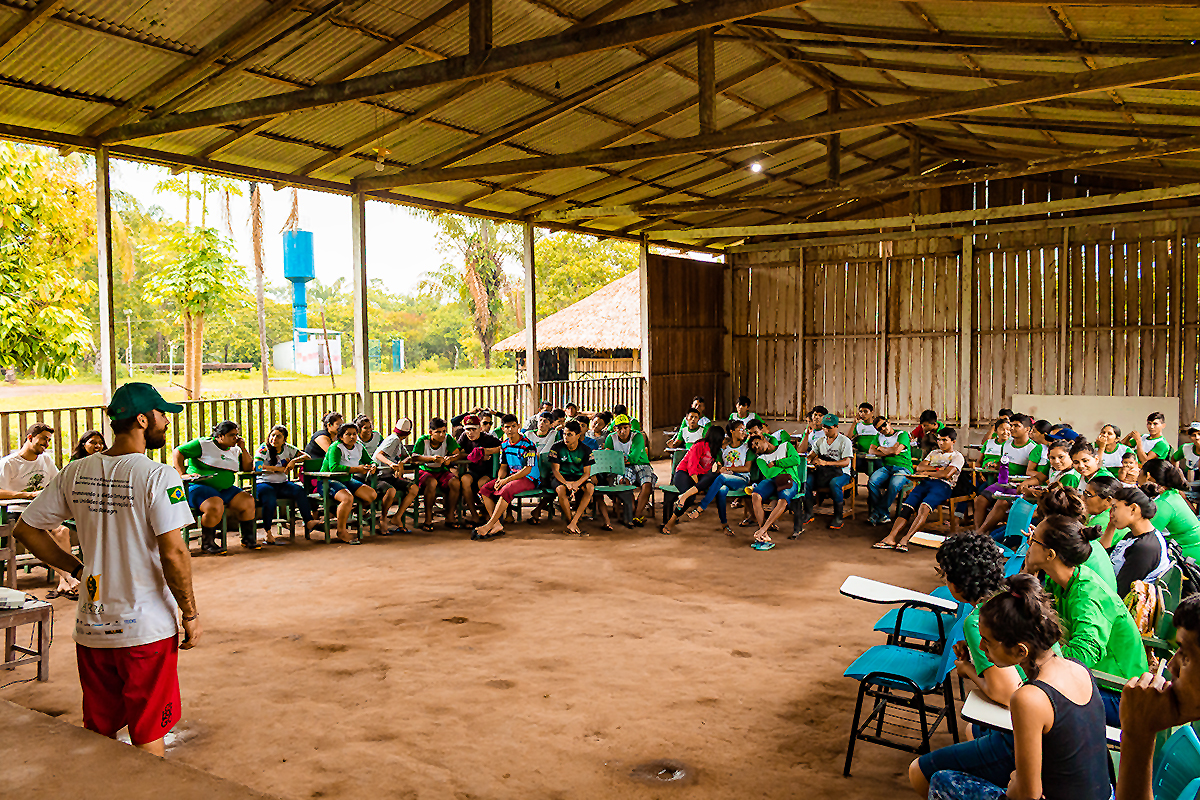 For the coming year, one of the actions planned is the distribution of regional didactic material in the municipal education network

2018 was a year of achievements for all those involved in the Maués Guaraná Alliance (AGM), which managed to take its actions to 700 children and young people from the municipality, in more than 20 workshops, cultural exchanges and extracurricular activities promoted by the alliance and their partners.

Under the coordination of Idesam – with support and funding from Ambev and USAID – practically all Working Groups (WGs) reached the goals proposed in the AGM’s areas of interest, currently divided into Education, Sociocultural Production, Tourism, Sustainable Production, besides the organization of farmers through a Producers’ Council.

One of the most important WGs was Sustainable Production, which surpassed the goal of producers and young people trained in their courses and workshops, adding up to 120 people reached in 2018. According to the coordinator of this WG, the agronomist Laís Bentes, the focus of the actions was to promote exchanges between farmers, encouraging sustainable production practices, with workshops on biofertilizers, organic fertilization and practices to produce in greater quantity and quality.

Another highlight of the actions of the Sustainable Production WG in 2018 was the campaign to encourage the consumption of regional products, which promoted activities at the main fair of Maués, with demonstrations of different ways to consume a regional product. “We took recipes with cará, maxixe, guaraná, mango and other species easily found in the region and that over time have been replaced by processed foods. I believe that all these actions of the first phase of the Sustainable Production WG will leave an important legacy for Maués”, celebrates Bentes.

The campaign quoted by Laís involves a seasonal calendar with several products sold at the Maués Producer’s Fair, so that consumers always know the exact month of harvest of each food. A digital platform will also be set up containing the productive data collected at the fair. This platform will be developed in partnership with the students of the Maués Campus of the Federal Institute of Amazonas (Ifam).

Far beyond the numbers, the Sociocultural Production WG in 2018 was able to advance in its work to rescue the traditional knowledge of midwives, artisans and gambá masters, bringing youth closer to these manifestations, which were gradually disappearing. This year alone, the activities of the Sociocultural WG involved more than eight cultural exchanges between different riverside and indigenous communities of Maués, leaving their mark on more than 100 children and adolescents, including training and cultural presentations.

Among the most recent actions, the Socioenvironmental Tourism WG carried out the first edition of “Maués Eco Artes”, which promoted an interaction between culture, art and the environment, and also included trees transplants, grafitte production and exhibition, indigenous art and photographs, regional music and an Ecological Games, with awards that totaled R$3,000 to the participants.

“We hardly see events of this kind being held and the Maués Guaraná Alliance has strengthened various spheres of local society, especially in the art and education ones. From the moment AGM’s activities began, many artists began to show up. It has further boosted cultural activity in the city and Maués is being more promoted with these actions”, says Erick Dammon, one of the WG’s organizers and artists.

Another action of the WG is the promotion of three Maués riverside and indigenous tourism enterprises, by improving the infrastructure and materials to receive visitors. In addition, the AGM works in the elaboration of tourist guides and in the valorization of guaraná as cultural and visual identity of the city.

Education in the spotlight

Education has always been one of the pillars in the construction of the Maués Guaraná Alliance, so the WG that handles the subject focused on critical points in the municipality, such as low education and training of teachers in rural areas, lack of cultural appreciation in the local identity construction of children and the problem of idleness in the streets, which leads many young people to have contact with drugs and violence.

In 2018, the AGM mobilized more than 160 teachers in the elaboration of a didactic material for children with regional content that will soon be distributed in the education network. More than 40 teachers participated in the trainings promoted by the Alliance and its local partners, in addition to over 100 young people and children who became involved in extracurricular activities.

The agroecology student at IFAM-Maués and a resident of the Indigenous Territory Andirá-Marau/Michiles Isle , Agnaldo Guimarães de Almeida, 17, points out that agroecology has changed the lives of community members, avoiding burnings, among other benefits. “We learned the agroforestry technique, which has added a lot to our community. We want this to be reflected in our lives and in other communities so that we can make our plantings in a sustainable way. The Maués Guaraná Alliance has helped us a lot by bringing these special courses”, says Almeida during one of the capacitations promoted by AGM in partnership with IFAM in November 2018.

In the evaluation of the AGM technical coordinator, Eric Brosler, the alliance was able to achieve clear improvements in several lines of action. “I believe we have been able to promote a greater understanding of Maués’s guaraná chain, with its bottlenecks and opportunities. A positive balance was also all the generated knowledge and transparency in the actions between the institutions and partner groups”, emphasizes Brosler.

The Maués Guaraná Alliance is composed of riverside people, traditional farmers, masters of culture, artisans, teachers, philanthropic organizations, youth and indigenous people, with the support of community associations and farmers, Ambev, USAID, IFAM, UEA (University of the State of Amazonas), Maués City Hall, Cultuam, Mama Ekos, Embrapa, IDAM (Institute of Agricultural Development and Sustainable Forestry of the State of Amazonas), among others.