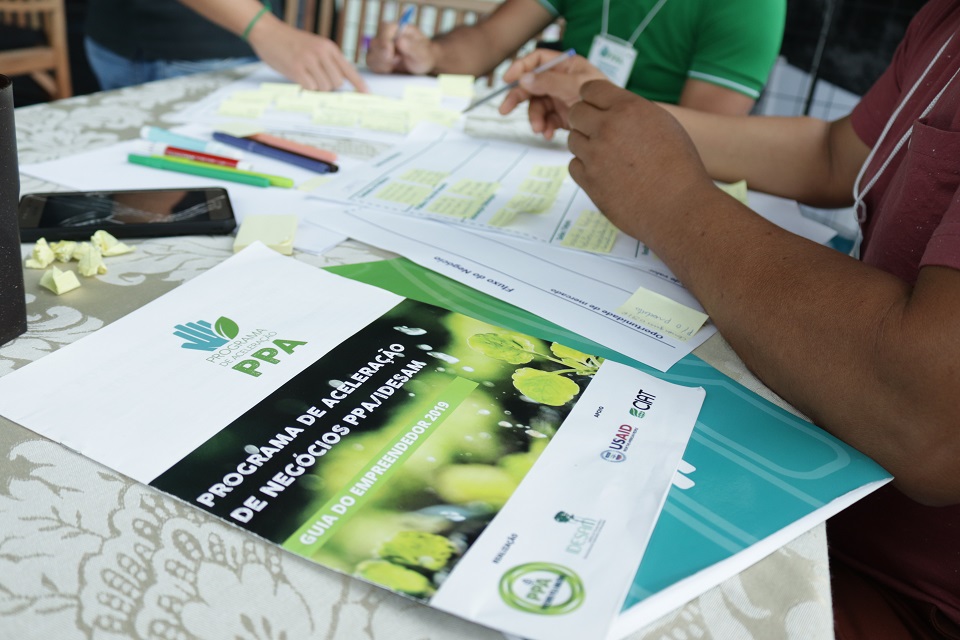 In addition to building indicators, the startups were encouraged to establish connections and exchanges that can offer new business opportunities

Kicking off the activities of PPA’s (Partnership for the Amazon Platform) Startup Accelerator Program, representatives of 15 impact businesses from the Amazon got together from February 18 to 20 at the Impact Hub, in Manaus, and started working on their enterprises’ change theories and indicators.

Developed in partnership with Sense-Lab and Move Social, the Workshop on Business Models Innovation and Construction of Impact Indicators presented the C Model to the entrepreneurs participating in the Program, encouraging each of them to work simultaneously on business design and impact management chain in an integrated manner.

In groups, the entrepreneurs made progress modeling their own businesses at the same time they interacted among themselves, taking questions and pointing out similarities. These startups, located in municipalities of the states of Amazonas and Pará, also engaged in connections and exchanges that might bring new business opportunities.

“Our goals, during these workshop days, were to build a logical narrative, refining each businesses’ vision, their interaction with the impact and defining key indicators to each one of them. To build a vision of success for each startup, but also a joint vision of what all of this will result as a Program”, says Antônio Ribeiro, from Move Social.

As assessed by Antonio de Lima Mesquita and Nubia Mireya Garzon Barrero, from the startup Ecopainéis da Fibra do Fruto do Açaí, the moment was also of cocreation. They described the building process along the workshop as a big differential to the business, in which at the same time that each one think of their own enterprise, also shares visions with the others.

Tainah Fagundes, from Da Tribu, highlights that the experience has been really important so that the businesses can take a special look on the impact: “The impact is the blind spot, we generate it but we don’t measure it, we don’t make it tangible. And this is a tool (C Model) that arrived to guide us. I was glad that we are here with Move Social and Sense-Lab, which are prominent professionals focused on business impact, not encouraging the development of a business plan for a traditional company. We are really looking at differentiated businesses. And to them it is also an apprenticeship, getting to understand a little bit of the Amazon, which is pretty peculiar. It’s a two-way street, an addition.”

For Andreas Ufer, from Sense-Lab, the call to work with these businesses’ acceleration adopting the C Model from the beginning of the process contributes to the quality of the Program throughout the year, while also helping to validate the tool itself. “The potential of this is substantial in two directions. First, in the sense of building a robust alternative to the Amazon and, second, in influencing the rest of the impact business movement. And there is also a different vision for us, because the Amazon has a diverse context, here we learn how to handle all of this”.

Antônio Ribeiro, from Move Social, who already knew several of the businesses that attended the Programa at the Impact Investing and Sustainable Businesses Forum in the Amazon, in November last year, considers the workshop that was carried out as a kind of continuity of the relation established, and highlights the privilege of experiencing and being able to be close to a process of transformation of the Amazon. “It also requires that we study more, get to know more about specific realities. And it has been great to see people here engaged in this construction, opening up to reflect from this logic that we are proposing”.

Even though the entrepreneurs participating in the PPA’s Startup Accelerator Program have diverse profiles, it is noticeable that they are aware of their strength, being able to inspire similar initiatives, leveraging a new economy for the region.

“It’s the first time that such a strong group of entrepreneurs gets together to solve socioenvironmental issues in the Amazon through their own businesses. The solution to the deforestation goes through the development of innovative solutions to the region’s economy. The Amazon needs a new economy. And it starts now”, states Mariano Cenamo, Idesam’s co-founder and PPA’s executive coordinator.

The impact business ecosystem in the Amazon is thriving. The number of initiatives for inclusion of riverine, indigenous and quilombola communities and family farmers in production processes is rising. These businesses commit to leverage a new economy in the region, opposing deforestation and predatory activities and valuing sociobiodiversity.

In 2018, the Partnership for the Amazon Platform (PPA) and Idesam carried out, with support from the United States Agency for International Development (USAID) and the International Center for Tropical Agriculture (ICTA), the initiative’s first Business Call, which received 81 inscriptions. Supporters from scratch, USAID and ICTA share PPA’s executive coordination with the Amazon Conservation Team (Equipe de Conservação da Amazônia, in Portuguese) and the Peabiru Institute.

Of all those inscribed, 15 were selected to join PPA’s Startup Accelerator Program, which will happen through 2019 and will count with workshops, mentoring, legal and accounting advice, scholarships and coworking spaces to the startups and its entrepreneurs.

(Check out the event’s photo gallery in our Flickr)