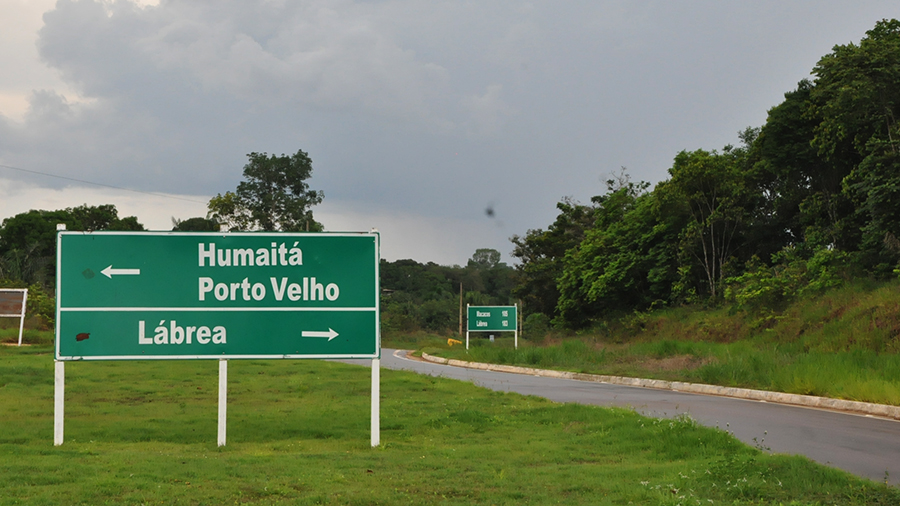 Analysis of 13 municipalities in the states of Amazonas and Rondônia shows rise of deforestation, increase of cattle ranching and the trespass onto indigenous lands

On May 10th, Idesam launched the study “Environmental and Socioeconomic Analysis of Municipalities Under Influence of BR-319 highway” (‘Análise Ambiental e Socioeconômica dos Municípios Sob Influência da rodovia BR-319’, in Portuguese). Data from the publication – which integrates Project BR-319: Monitoring and Recommendations – points to Porto Velho, Lábrea, Manicoré and Autazes as the regions with the largest amount of deforested area accumulated until the year 2016. Only these four municipalities were responsible for 1.7 million of the 2.3 million hectares devastated in all 13 cities analyzed. The launch of the study featured a round of discussion on how this and other problems intensified by the road reconstruction can be minimized.

In addition to those already mentioned, Manaus, Careiro da Várzea, Careiro, Manaquiri, Beruri, Borba, Tapauá, Canutama and Humaitá were also analyzed because they are directly linked or because they have some road with connection to the highway – the target of many controversies. According to the study, the most controversial piece of the BR-319 highway is the so-called “middle stretch”, which is located between kilometers 250 and 656 and is subject to environmental licensing, as it requires a total reconstruction of the pavement.

The loss and degradation of habitat, chemical pollution, increased violence and trampling of fauna were some of the negative impacts resulting from the construction of roads in the Amazon presented at the launch of the study, which also highlights the human invasion as another worrying factor.

This topic gains special attention in the analysis, since the anthropic invasion caused by the road expansion in the Legal Amazon is accompanied by serious land problems that lead to disorderly occupation, deed-falsifying (‘grilagem’, in Portuguese), conflicts and expulsion of traditional populations.

One of the authors of the study, Idesam’s public policy coordinator, Fernanda Meirelles, points out that the document draws conclusions that point to the need to increase governance in these territories, intensify the performance of public agencies and greater participation of civil society in this discussion as a whole.

“In these areas (highlighted in the study), occupation is occurring rapidly and deforestation is growing at a very high rate. It is important that environmental land regularization happens. We have identified many overlaps of declared CAR (Rural Environmental Cadastre) areas in Conservation Units (UCs, in Portuguese) and this is very problematic. It requires a field check of these declared areas, because they invade indigenous lands and are inside the UCs”, Meirelles warns.

In the specific analysis of the evolution of deforestation, data from Prodes (Deforestation Monitoring Project in the Legal Amazon by Satellite) were used to account for accumulated deforestation since the year 2000. In addition, areas considered vulnerable due to the highway paving were selected and analyzed separately, as is the case of Vila de Realidade, that belongs to the municipality of Humaitá.

One of the participants in the discussion was the project and research analyst of the Vitória Amazônica Foundation (FVA) Marcelo Santos, who highlighted the impact of the federal highway not only in the interior, but also in the Metropolitan Region of Manaus. “In the case of the BR-319, we consider critical the locations where the planned roads will be built, which constitutes a new facilitated access route to areas of still intact forest. Other (critical) points are Careiro and Humaitá, the latter in an ecologically important region of Amazonian meadows”, says Santos.

In order to understand the impacts of road paving in these municipalities, Idesam’s researchers analyzed not only the dynamics of deforestation over the years, but also the evolution of socioeconomic indicators (such as GDP and HDI), land planning, infrastructure and use of the land and rural production of each of them.

In this analysis, issues such as access to basic medical care, water and sanitation, housing, safety, ecosystem sustainability, higher education, among other factors that confirm the social impact of the highway are included.

In 1991 – the initial year of the database analyzed – all municipalities, with the exception of Manaus and Porto Velho, had a very low Human Development Index (HDI). In 2010, all went out of this classification going up into the categories from low to high. There was a great evolution in the HDI of these municipalities, with increases of 42% to 233% in the twenty years of analysis. The states of Amazonas and Rondônia and Brazil increased their HDI by 57%, 70% and 48%, respectively, from 1991 to 2010.

On the other hand, these municipalities presented high values for the Gini index in the interval analyzed, which means a high inequality in the distribution of income. From 1991 to 2010, this inequality increased to nine of the 13 municipalities. In the same period, the Gini index decreased 4.6% for Brazil and 7.6% for Rondônia. The North region remained stable and the State of Amazonas increased by 7.6%.

Idesam’s senior researcher, Mariano Cenamo, points out that the analysis makes clear that the impact of the road already exists, regardless of whether or not it is paved. According to Cenamo, this can be seen in the southern region of Amazonas, where there is a very strong occupation and an intensified land marketing process.

The study points out that municipalities with worse scores, Lábrea and Tapauá, still face problems related to the lack of access to basic and higher education, nutrition services and basic medical care, as well as precarious water supply.