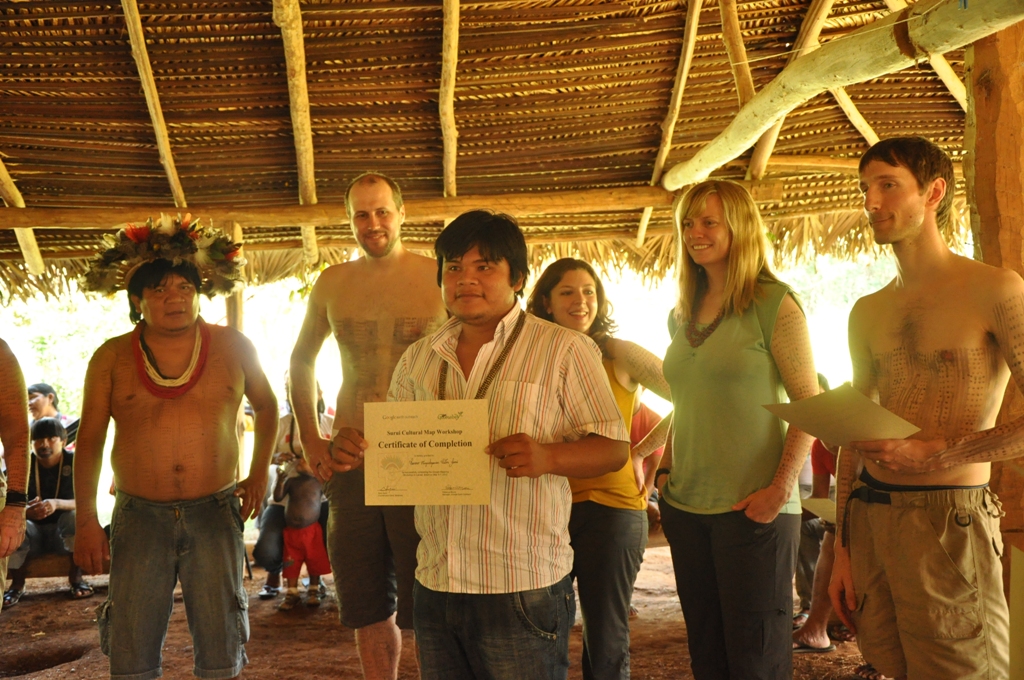 One of the world’s most successful voluntary conservation and forest carbon storage projects has been cancelled due to an uncontrolled surge in illegal diamond and gold mining and illegal logging which pushed deforestation above acceptable levels. The Suruí Forest Carbon Project (PCFS by its Portuguese acronym), based in Brazil’s Sete de Setembro Indigenous Territory (TISS), on the border between the Amazonian states of Mato Grosso and Rondônia, was canceled Monday by the Paiter-Suruí indigenous group.

In 2009, the Paiter-Suruí, led by Almir Suruí, and with the help of many international environmental organizations, became the first indigenous community in the world to design, implement, and engage in a forest conservation and carbon storage project – covering their 248,147 hectare (958 square mile) territory – a program financed by selling carbon-offset credits, and ultimately administered under the United Nations REDD+ program (Reduce Emissions from Deforestation and forest Degradation).

Despite its untimely demise this week, the project achieved some of its goals. An innovative environmental accounting system – which held a percentage of the overall carbon credits as risk insurance in a buffer account – will ensure that the emissions already reported will be upheld.

The Paiter-Suruí indigenous group, today numbering only about 1,400 individuals, was uncontacted until 1969. More than 90 percent of its original members died of tuberculosis and smallpox within five years of first contact.

In the years immediately after that, illegal logging, which critics allege was enabled via illegal payoffs to the National Indigenous Affairs Agency (FUNAI), threatened the tribe’s livelihood, which depended on maintaining the integrity of the Amazon rainforest within their territory. Much of this logging was facilitated, say critics, by a World Bank-funded road, the Polonoroeste development project, that brought many outsiders into Paiter-Suruí territory.

However, with the help of NGOs, including Forest Trends and Rainforest Action Network, and with legal support from law firm Baker McKenzie, the indigenous group scored major victories in the last decades of the 20th century in curbing illegal logging.

First came the passage of Article 231 in the Brazilian Constitution of 1988, which declared that indigenous groups living in officially demarcated territories had the sovereign right to derive economic benefits from natural resource management. Then a FUNAI-related law extended the ownership implications of Article 231 to carbon stocks maintained by avoiding deforestation.

Beto Borges, Director of Forest Trends’ Communities Initiative and an architect of the Suruí Forest Carbon Project (PCFS), told Mongabay that while both laws were instrumental building blocks leading up to the carbon sequestration project, the FUNAI law was “precedent-setting.”

“The ruling carries an enormous legacy for indigenous-led conservation projects [not only] in Brazil, but also in Latin America, and all over the world,” Borges said.

When the Paiter-Suruí, led by Almir Suruí, and supported by Borges and many others, became the first indigenous group ever to put together a working forest conservation project within an indigenous territory financed by selling carbon-offset credits, they were seen as pathfinders.

The indigenous group was supported technically and financially by Forest Trends, the Institute for Conservation and Sustainable Development of the Amazon (IDESAM), the Conservation Team of the Amazon (ECAM), the Brazilian Biodiversity Fund (FUNBIO), Brazil’s National Institute of Amazonian Research (INPA), and AgroParis Tech; and also partnered with the Verified Carbon Standard (VCS) and the Climate, Community, and Biodiversity (CCB) Alliance to curb deforestation in its territory.

These forest conservation efforts constituted a major element of the indigenous group’s 50-year “life plan,” designed to preserve their part of the Amazon as well as their traditional livelihoods. The indigenous group sought to promote sustainable, non-deforestation economic activities, including handicrafts production, sustainable chicken farming, and Brazil nut harvesting.

To finance the life plan, the tribe put together a proposal to generate carbon offsets by preventing deforestation under the United Nations climate change and atmospheric carbon reduction framework known as REDD+.

However, Steve Zwick, Editor of Ecosystem Marketplace and a longtime supporter of the Suruí effort, told Mongabay that while the project has often been publicized as a banner achievement for REDD+, the project actually predates the UN framework, as it was developed entirely in voluntary markets.

The PCFS was drawn up in accordance with the Verified Carbon Standard (VCS), which required a baseline risk assessment to determine how many of the offset credits produced would be held in a pooled buffer account for Agriculture, Forestry, and Other Land Uses (AFOLU) in case unexpected factors threatened ongoing projects. Higher-risk projects require a larger number of offset credits to be held in the buffer account.

Pedro Soares, Program Manager for Climate Change/REDD+ at IDESAM and an author of the baseline report, told Mongabay that initial risks – potential threats to the forest protection plan – included illicit cattle ranching, illegal logging, and the encroachment of agribusiness. No one expected the discovery of gold or diamonds in the territory.

In its early years, the PCFS – designed to prevent at least five million tons of carbon emissions in 30 years – was incredibly successful. Soares told Mongabay that illegal logging dropped to almost zero from 2009 to 2012, a period during which surrounding regions saw deforestation rates more than double.

“Before the program began, it was common to see 100 logging trucks coming in and out of TISS every day,” said Borges, who has engaged since 1990 with the Paiter-Suruí. “After 2009 that number had gone down to nearly zero.”

In 2013, PCFS sold its first carbon credits, creating a big media splash, and selling the equivalent of 120,000 tons of carbon to Latin America’s largest cosmetics company, the Brazilian firm Natura. In 2014, FIFA bought the same number of credits to help offset emissions produced during the World Cup, held that year in Brazil.

Verra, the NGO that manages the VCS, calculated that the offsets generated by the PCFS from 2009 to 2014 had the equivalent environmental impact of taking 64,000 cars off the road for a year.

However, the PCFS was utterly unprepared for two unexpected setbacks, in 2015 and 2016: the discovery of gold and diamonds, respectively, on TISS territory.

In the years after that, illegal mining (garimpo in Portuguese) proliferated in the indigenous territory, fuelling an internal dispute between Almir Suruí, who favored PCFS, and his cousin Henrique. The intrusion into the conflict by the Catholic Church’s Indigenous Missionary Council (CIMI) complicated matters, according to analysts. CIMI officially opposes REDD+ on the grounds that it commodifies indigenous territory, so its presence strengthened opposition to the PCFS, Borges said.

In 2017, the Guardian reported that the territory had lost 653 hectares (1,614 acres) of forest, a deforestation rate 256 percent higher than the project’s allowable limit.

“CIMI does important work for indigenous peoples in Brazil,” Paiter-Suruí leader Almir told Mongabay in a phone interview. “However, I don’t understand why they first took such a strong stance against the carbon project, and then created and promoted the faction within the Suruí involved in illegal mining. They clearly put their own interests and ideologies above those of all but a few Suruí, without consulting the group, and destroyed an incredibly successful project.”

CIMI did not respond to Mongabay’s repeated requests for comment.

These internal and external disruptions caused the suspension of the project in 2017. It was officially canceled on Monday.

“Any legal economic activity done within indigenous lands has significant trouble competing with illicit mining and logging, which promise quick payouts and don’t require distributing profits with the group,” said Borges. “The perverse opportunity costs of illegal mining and other related activities are the big question to solve for conservation and indigenous rights advocates,” in the future.

In an email, Zwick wrote: “In a nutshell, the program worked very well, but the baseline never anticipated the discovery of gold and diamonds, as well as the intervention of religious extremists.”

Soares, a believer in the VCS design, asserted that future carbon offset programs must be less conservative in projecting deforestation risks, and must require that a larger percentage of credits be placed into insurance buffer accounts to allow for disruptions like those that plagued the Paiter-Suruí.

Borges, while also praising the PCFS, condemned the intrusion of external, powerful and self-interested actors; lamented the lack of law enforcement in the indigenous territory; and the lack of state investment in indigenous education, health, and livelihood programs that could have alleviated individual economic and social pressures to secure short-term financial gain.

Borges also criticized CIMI: “How come the Church made so much noise about REDD+ and about illegal logging, but then went quiet in the period when logging stopped? Where is CIMI now with the increase in illegal mining?… Ideologically, it doesn’t add up.”

“The project was unequivocally a success,” Paiter-Suruí leader Almir concluded. “It serves as a framework for indigenous conservation efforts all over the world, which enables communities to preserve their environments, prosper economically, and engage politically in these processes.”