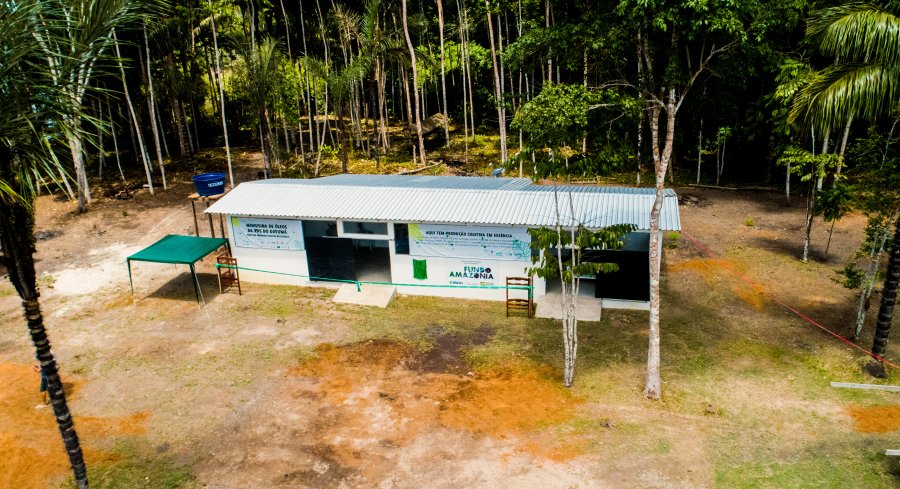 Carried out by Idesam, the Cidades Florestais Project (Forest Cities Project) opened last Thursday (01/23) a mini-plant to process vegetable oil from the Amazon in the Uatumã Sustainable Development Reserve (RDS, in Portuguese), municipality of São Sebastião do Uatumã. With an investment of R$ 400 thousand, the mini-plant is the first of two new structures to be built by the Project that has already improved other three plants located in the municipalities of Carauari, Silves and Lábrea.

Representatives of the Amazon Fund, the National Bank for Economic and Social Development (BNDES) and the State Government were present at the event. The structure will directly benefit over 300 families, diversifying the source of income generation and strengthening social entrepreneurship in the region.

The plant’s production will mainly supply the cosmetics sector, by benefiting buriti, breu, priprioca, andiroba and copaíba oils and cupuaçu and tucumã butters.

For Elisângela Cavalcante, farmer and extractive producer in the Uatumã RDS who has been working with tucumã (among other species) planting and collection for many years, the newly opened structure brings a new perspective to the fruit. “We did not take advantage of the stone, the tucumã almond, so the mini-plant is a hope for this reuse and that this generates income for our family and the whole community as well”, says Cavalcante.

The industry has a production capacity of 3 tons of fixed oils, in addition to 90 liters of essential oils a month. If it reaches its maximum production capacity, the mini-plant can generate an average revenue of R$ 850 thousand to community members of the Uatumã RDS.

“The Uatumã’s mini-plant will make products with greater added value to the community of the Sustainable Development Reserve. This will make the Rerserve’s associates who go to work at the plant have a higher income gain, for residents and for the Producers’ Association that will manage it”, said André Vianna, coordinator of the Project.

The Cidades Florestais Project started in 2018 with the purpose of promoting the forest economy of municipalities in the interior of the state of Amazonas. This takes place through the promotion of forestry and vegetable oil production chains, with producer organizations in the following municipalities: Apuí, Carauari, Itapiranga, São Sebastião do Uatumã, Silves and Lábrea.

“Bio-economy deep in the Amazon must be seen through the potential for multiple use of the forest, and Cidades Florestais structures associations for the diversified production of wood, oils, essences and vegetable butters from the Amazon”, highlights Carlos Gabriel Koury, Idesam’s Technical Director.

In the first years of activities, the Project enabled the sale of over 8 tons of vegetable oils produced by extractive communities, with a turnover of more than R$ 400 thousand, benefiting more than 90 producers. A potential of more than 300 trees for non-timber use has already been mapped. For timber use, a total of 5,200 hectares in productive areas was licensed for community forest management with the Project’s support only in the Uatumã RDS. Altogether more than ten thousand trees are already registered in the app.