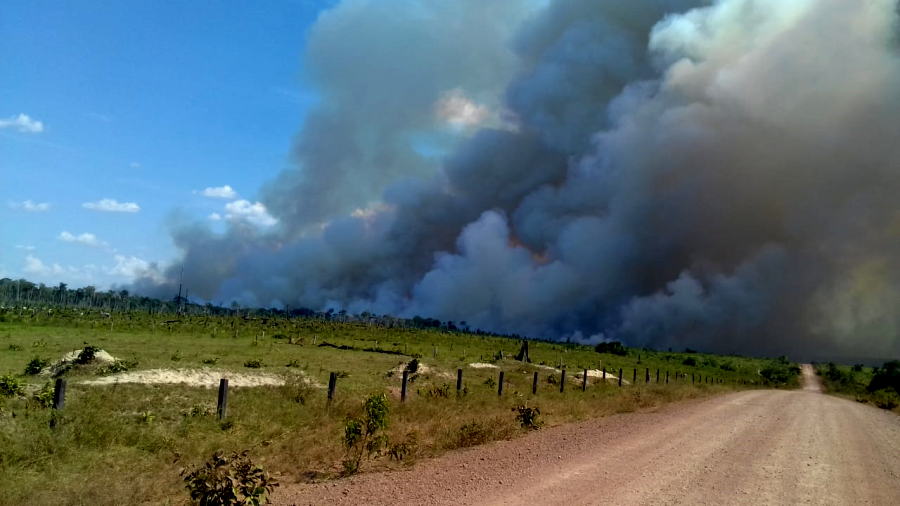 Read the full article in english by clicking HERE

The region tops the list of municipalities with the most fire outbreaks in the entire Amazon. Alternatives range from creating strategic intelligence to forest restoration actions.

When images of smoke in the skies of Apuí started arriving from our local teams in late July we thought it was business as usual, since fires are still a sad reality in this region of the Amazon. But what was seen in the following weeks was an exponential increase in the number of burns and fires. The municipality even reached the top of the list, with the larger number of fire outbreaks in the entire Amazon, beating municipalities in the states of Pará and Mato Grosso.

The Southern region of Amazonas is one of the places where agriculture and cattle raising is expanding, pushed by the states of Mato Grosso and Rondônia. Out of the five municipalities from Amazonas in the list of the most deforested ones, Apuí, Lábrea and Novo Aripuanã reached an all-time high in 2019. They remain among the municipalities with the worst annual deforestation rates in the Amazon.

Biologist Gabriel Carrero, associate researcher at Idesam, explains that the history of deforestation in Apuí dates back to the foundation of the municipality.

“Apuí was created by settlers that came from the South of Brazil with strong farming tradition. When they arrived in the Amazon they had a clear – and institutonal – view that they had to deforest to ensure their ownership of the lots. So that’s what the municipality built its identity on”, he points out.

The biologist warns that the period of drought in the Amazon is usually from July to November, being even more intense in the last two months.

“Considering that we still aren’t in the end of the dry season, it is important to take immediate and emergency actions to avoid a total lack of control of the burns and fires in the region”, he ponders.

Present in the region for over 12 years, Idesam released last Friday (09/06)  a technical note with short and medium term proposals for the region . The goal is to provide techincal subsidy to reduce the impacts of this season of burnings, which has affected Apuí and particularly the Juma River Settlement Project, that concentrates 84% of Apuí’s heat sources, the equivalent to 21% of the entire states’ heat sources.

Besides proposing a detailed analysis of the fires – in order to identify the dynamics of the fire and the people responsible for this recent increase of fires in the municipality – the action plan also involves elaborating a joint strategy to prevent and replace the use of fire to clean pastures.

“There are different kinds of burns or fires in Apuí. Each has its own dynamics and must have a specific coping strategy. The idea is to involve the state government, the city hall, local associations and unions among other actors besides strengthening the local fire brigade”, he explains.

Among the actions, the institute also proposes a positive agenda for the municipality, focused on forest restoration and encouraging sustainable production. One of the strategies adopted by Idesam in its projects and that has to be more widespread is the use of agroforestry systems (SAFs, in Portuguese) and silvopastoral systems (SSPI, in Portuguese). These systems show that it is possible to conciliate agriculture, cattle raising and forestry production with the conservation of native forests. The proposals also seek to consolidate the productive lives of locals by improving production, low environmental impact techniques and combating invasions and illegal occupation (known as grilagem, in Portuguese).

According to Pedro Soares, Climate Change manager at Idesam, the increase in the number of forest fires in the Amazon puts Brazil at risk due to its commitments under the Paris Agreement to reduce emissions.

“Greenhouse gas emissions are directly linked to the conservation of the standing forest. In other words, Brazil is burning its environmental assets that could become financial incentives for the populations and communities living in the Amazon region”, he explains.

For Soares, besides strenghtening local teams that control and combat fires, it is necessary to implement alternatives that replace the use of fire in the region, as it is a major source of greenhouse gases.

“Even in the dry season, fire doesn’t happen spontaneously in the Amazon, that is to say, these burns and fires start by human action and get out of control due to the drought, reaching forest areas”, he concludes.