This year, the program benefited eight communities of the Uatumã Sustainable Development Reserve, in the state of Amazonas

More than 7,000 trees were planted by the Carbon Neutral Program (PCN, the acronym in Portuguese) in 2020, benefiting around 150 people in eight communities of the Uatumã Sustainable Development Reserve (RDS, the acronym in Portuguese), in the interior of the state of Amazonas. Created and coordinated by Idesam since 2010, the program aims to offset the greenhouse gas emissions of people, events, products or any activity carried out by institutions that seek to reduce the impact of their footprint on the planet.

In 2020 alone, the planted seedlings will have the role of compensating around 2,000 tons of carbon emitted into the atmosphere, recovering seven hectares of degraded areas in the reserve. This was possible thanks to the planting of seedlings of Cacau, Cupuaçu, Açaí, Guaraná, Cumaru, Andiroba, Graviola, Avocado, Preciosa and Itaúba, all species chosen in partnership with community members.

The seedlings of forest species that were planted were produced within the reserve itself, in three nurseries built on the properties of the PCN’s partner producers. Alongside the planting of the seedlings, seeds of pork beans, Ipê, urucum, patauá, jenipapo, paricá, banana seedlings, macaxeira, pineapple among others were also planted at the choice of producers.

“These species guarantee the sustainability of the system as they produce fruit in a short time and at different times. This way, the system will always be producing something, optimizing the space and efforts, generating food and income for the families”, explains Idesam’s environmental engineer responsible for the planting, Jefferson Araújo.

The farming families who benefited from the Carbon Neutral Program in 2020 live in the communities of Maracarana, Caribi, Livramento, Pedras and Jacarequara, traditional communities in the RDS known for their agricultural profile. The model of agroforestry systems (SAFs, the acronym in Portuguese) implemented in these communities was directed to the production of food, oils and forest recovery.

Mariza Nobre, one of the community members of the Uatumã RDS and partner of the Carbon Neutral Program, supports the initiative with her seedling nursery, which last year produced almost two thousand seedlings used in planting. Mariza is an example of the strategic role played by women in the cultivation of SAFs and in the success of the program, which counts on around 80 women in various fronts of action. 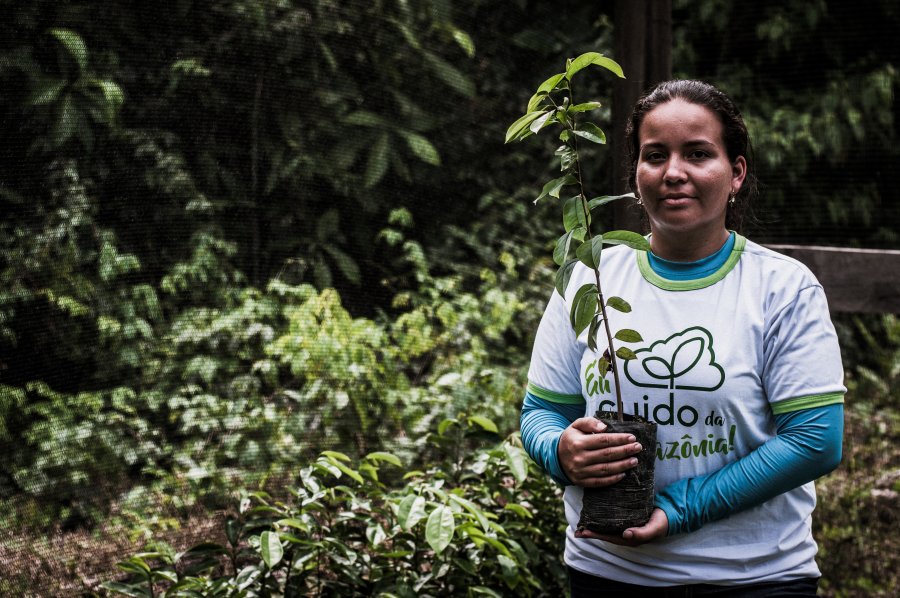 Mariza Nobre in her seedling nursery, at the Uatumã RDS (Archive/Rodrigo Duarte)

“My job in all this is to produce a good seedling, so that when it goes to the field, we get a good result and for this I count on the support of people in the community who work with me. The people behind it are fundamental, because just as we need someone to make seedlings, plant and take care of the SAFs, we also need someone to finance this initiative, so that it reaches even more families”, says Mariza Nobre.

According to Idesam’s new business coordinator, Talia Bonfante, the fires in the Amazon in 2019 moved society and led to greater participation by individuals interested in offsetting their emissions. Bonfante highlights that at least one third of the program’s planting was done through the donation of tree seedlings.

The areas recovered through the implementation of the Carbon Neutral Program’s Agroforestry Systems were carefully selected throughout 2019 by the program team, which counted on the support of trainees from the Federal Institute of Amazonas (IFAM). In this stage of preparation prior to planting, Idesam held meetings, courses on fire-free land preparation and several technical visits to the communities.

Due to the great distances between the communities within the reserve, one of the main challenges of the program is still the transportation of the seedlings to the planting areas, a stage that demands much effort and resources. In order to register a low rate of loss of seedlings with this logistics, the team needs to make several trips, in small regional boats.

All this work was only possible because the Program had the support of 21 partners this year, including individuals and institutions. Companies such as Alter-nativ Brésil, which supported the planting of 300 trees, were able to get to know the impact of this action on the lives of families in the Uatumã Sustainable Development Reserve.

“The experience of getting to know this reality up close, with my 16-year-old daughter, was a great lesson in humility, in interaction with the simple and true things of nature. Besides the program and all the logistical work that planting demands, we managed to understand that this is not only about planting a tree”, says the owner of the tourism company, Yannick Ollivier.